Earlier this year, Gartner said that Web-Scale data centers will completely re-invent how 50%~ of Enterprise customers operate by 2017.

In thinking about how (software) technology adoption occurs, I’ve observed an increasing divide in applications and automation platforms really built for two distinct kinds of users: Enterprise users and Web-Scale users. I’d put the former in the “20th century” category and the latter in our modern era (2010-present +).

Examples of Enterprise companies include, but are not limited to: Western Union, Walmart, HP, Nike, McKesson, etc.

Below are what I think some of the biggest differences are in terms of how these two types of companies adopt new technology. The four phases in column A are very dense and can be dissected further in a future blog post, this is just a broad view of what I am seeing today. 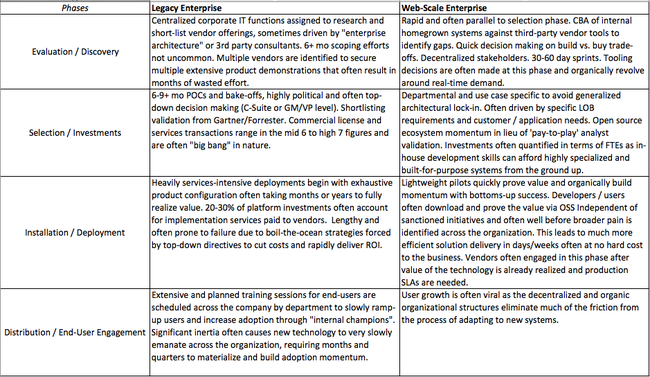 It’s no news that over the last 10-15 years, particularly noticeable in the last 5 years, the enterprise software industry has gradually transformed from complex, expensive, closed-source (proprietary) software stacks to... Continue →